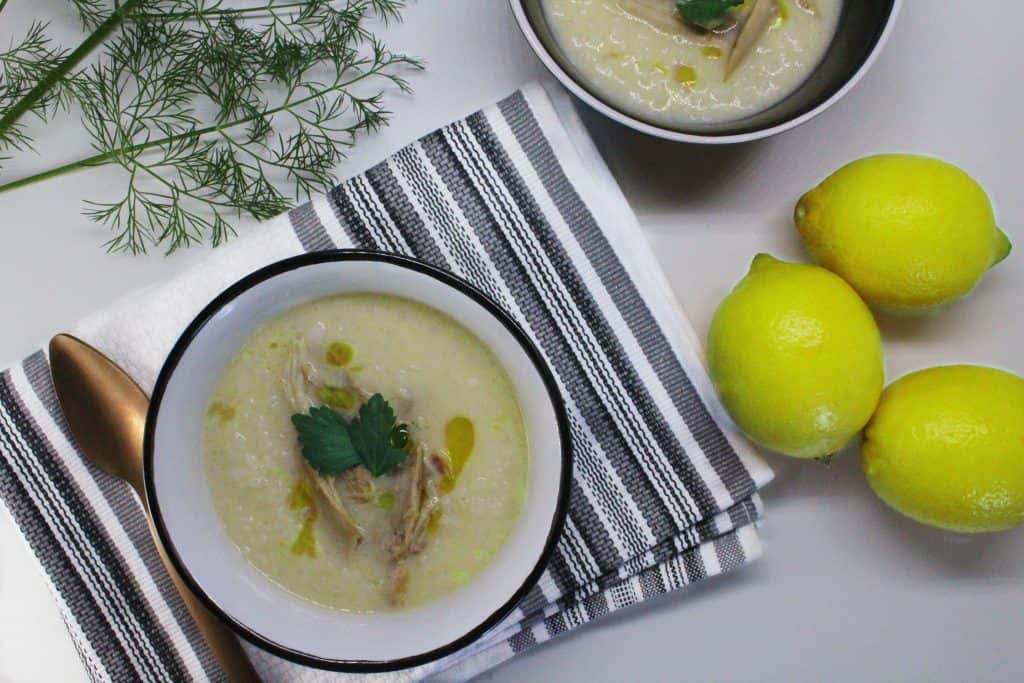 I am sure you enjoy a steamy chicken soup on cold winter days but maybe, just maybe, it is the same boring taste, more or less, every single time. It’s time for a change, a new recipe, a new flavor approach to that glorious soup. Because this traditional chicken soup with egg-lemon sauce is the cream of the Mediterranean crop.

Imagine a creamy and lemony thick soup made with chicken broth (the real thing) and flavored with veggies. The gracious simplicity of chicken soup, the Greek way: with avgolemono meaning a sauce with egg (=avgo) + lemon (=lemono) that makes the absolute steamy, comfort-soothing, unexpectedly fulfilling soup.

It’s hard to find the roots of the magnificent culinary discovery of adding eggs and lemon in chicken broth. However, historians give the credits to Sephardic Jewish cuisine with the “agristada” plate. This plate and the specific cooking technic came to Greece with Jewish immigrants settled in Salonica, North Greece, in the 16th century.

This sauce is actually an emulsion based on the process of mixing ingredients that aren’t supposed to stay mixed. Combining by force egg and lemon forms a liquid with thicker, creamier texture which is completely different from the initial form of the ingredients. The egg yolk helps bind egg and lemon that would normally not come together. Kind of culinary miracle or food science! 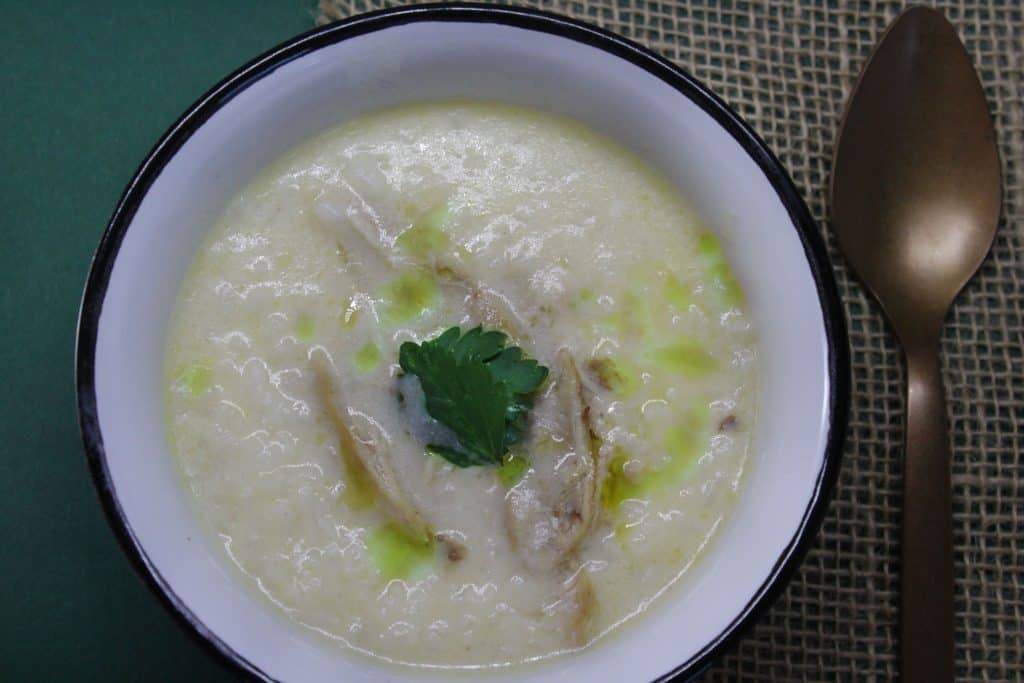 I have a question and I really want to find an answer. Why, on earth, do we need store-bought chicken stock or broth in chicken soup? During my research about chicken soups around the web, I found out that the majority of chicken soup recipes contain chicken broth. You know the one in cans with added sodium and probably ingredients you cannot even read. Come on!! Why not make your own broth or stock out of a nice, juicy chicken instead? In case you use rotisserie chicken or chicken breasts didn’t provide enough broth, you may use the homemade chicken broth that waits patiently in your freezer. The one you made in a flash with your own pretty hands.

Let’s jump in the secrets of the ultimate chicken soup and the easiest homemade chicken broth at the same time. Kill two birds with one stone post.

In a nutshell, you boil the chicken with some veggies, take out skin, bones, drain the broth and simmer the grain you want in it. At the same time, you make chicken stock with the chicken parts you used to throw away.

Chicken breasts for soup? I don’t get it. How do you get the broth you need for a tasteful soup? Don’t get boneless, skinless breasts. If a whole chicken is too much, get chicken thighs, legs, and drumsticks, preferably free range, because they will give the fat you need for a flavorful soup. Boil the chicken on medium-low heat, let it cool enough to take out the bones, the skin and other parts of the chicken you don’t eat. DON’T throw them away. Place all of them (bones, skin, giblets, and cartilage) in another small pot with enough water to cover them. Simmer for at least one hour while you prepare your chicken soup and your avgolemono sauce. Let your broth cool enough and store it in freezer bags or food containers. Enjoy the fruits of your labor with this delicious homemade chicken stock next time you want soup for dinner. I am telling you, ditch those cans for good…

This recipe calls for long grain rice according to its traditional version but orzo, couscous, brown rice, and any other pasta will work just fine. Follow the instructions on the package and be careful not to overcook it. I read once a chicken soup recipe with rice cauliflower. Why not? Take whatever you want to eat and let it simmer in that glorify bath of chicken broth. 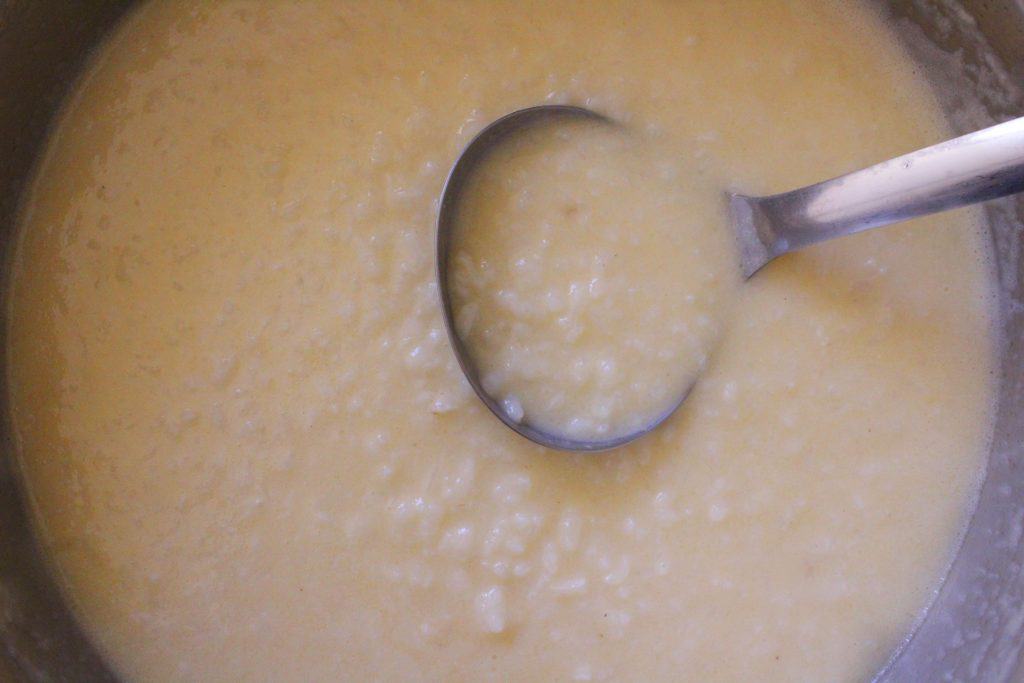 The avgolemono sauce. Well, that’s the tricky part. Nevertheless, fear no more. I am here for you. Important: Eggs whites are whipped away really hard with a whisk for at least 5 minutes. Hard! Like your life depends on it because this cooking technic is exactly behind the creaminess of that soup. At the end, the egg whites are still liquid bur foamy, with some bubbles and the egg looks slightly opaque. Perfect. Now it’s time to incorporate the egg yolk, lemon and add VERY slowly and gradually hot broth to temper the egg. Why? Because if you add the hot ingredient (broth) into the cooler one (egg and lemon sauce), can you imagine what happens? Right!! The egg is going to boil and give a stiffening liquid scramble egg mass. Epic culinary disaster!! 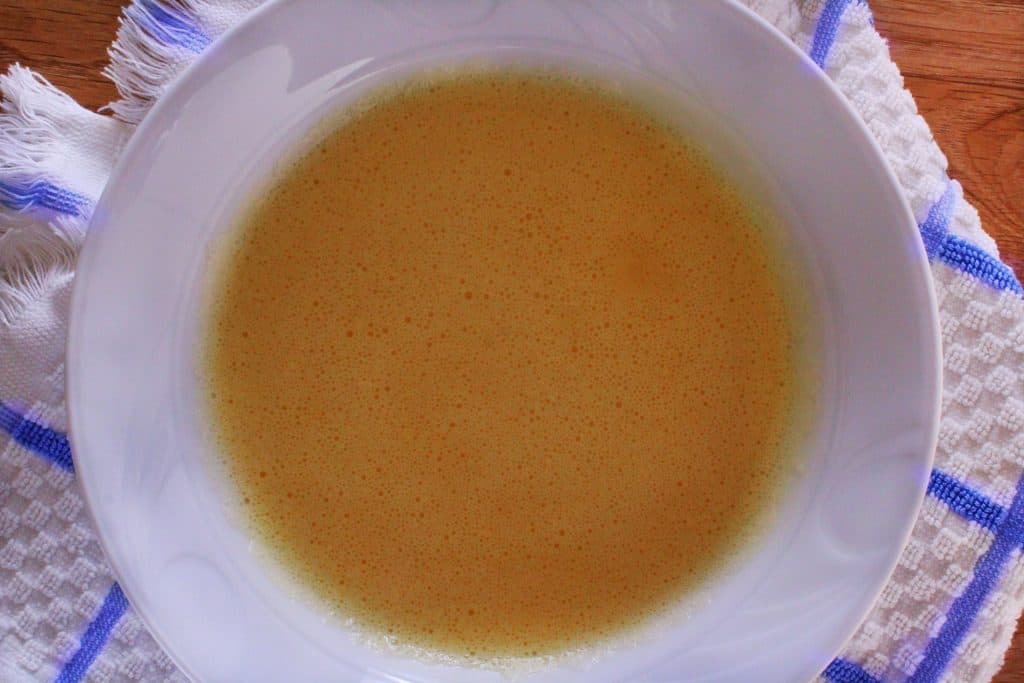 Start with 2 tablespoons of broth stirring and then increase the quantity while sauce’s temperature is rising.  Stop adding broth when the sauce is hot enough. The avgolemono is ready to join the soup but even then, just in case, add the sauce gradually and stir again. Simmer for 1-2 minutes MAX to let the sauce incorporate and take out all its flavor. Then remove from heat and serve immediately.

Last tip. When you add the avgolemono sauce in the soup, send loud, passionate kisses to the pot. It sounds crazy, I know. It’s a local custom in Greece to butter the avgolemono sauce up and that’s how you increase the odds of a rich, creamy, soul-soothing soup. It’s a nice custom that proves the sentimental engagement of home cookers during food preparation. Because a few decades ago, people were cooking with their hurts and treating with respect whatever they had managed to put in their pots. 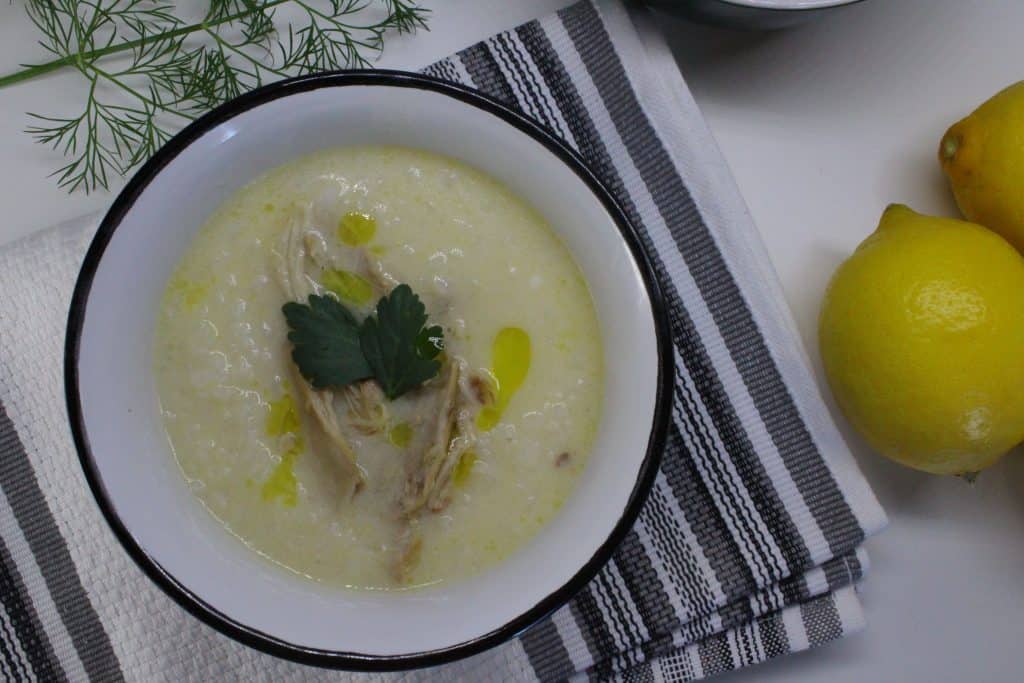 This soup is also great for when you’re feeling under the weather. It works like remedy because it contains cold-fighting compounds that help dissolve mucus in the lungs and suppress inflammation.*

Next time you wonder what to cook for dinner in a cold winter night, don’t hesitate to make avgolemono chicken soup and enjoy its unique complexity: creaminess of eggs, tangy lemons, meaty broth and starch of soft rice.

Serve immediately with homemade whole wheat bread and cabbage salad. You may garnish with parsley or dill but it is optional.

The following day the soup will be thicker because the rice will have soaked up a lot of the soup liquid during storage in the refrigerator. Add tap water and turn the heat up to medium. Stir regularly to prevent food from sticking to the bottom of the pot and add water to preferred consistency.

Bakaliaros skordalia is a traditional Greek dish that combines salted codfish fritters with garlic mashed potatoes. The deliciousness of this simple plate comes from the unique flavor and texture of the codfish due to the salting procedure. A thin, crunchy crust outside and sweet, creamy, and lightly fishy taste inside combined with velvet garlic mashed…

END_OF_DOCUMENT_TOKEN_TO_BE_REPLACED

HELLO EVERYONE!!!
Welcome to 30 Days of Greek Food. You are about to discover an exciting way of eating non-processed, super tasteful food, based on the Mediterranean Diet, mostly on the Greek version of it. I will share my passion for the gastronomy, the culinary tradition and the products of that region by proposing a 30 day program. It will be so much easier for you to follow and enjoy the enormous benefits of that healthy lifestyle. Read More…